Imran Qureshi, Side Effects (fragment), 2017
(photo: Usman Javaid, courtesy of Galerie Thaddaeus Ropac, London, Paris, Salzburg)
In her new project, the Vienna-based curator Goschka Gawlik refers to the situation of contemporary art, which is created in the global village, undergoing ongoing mutations, mutual influences and impacts, using multiplied quotations and references. An international group of artists, using different techniques and styles, share a desire to transcend the frames of their own cultures, an openness and a curiosity for otherness. The European artists gladly refer to the signs, symbols and stereotypes of the Far East. The artists from Asia, who have internalized the achievements of modern art and can use them with ease, while being aware of their own cultural background, engage in a kind of dialogue/game with Western culture. The works on display, already saturated with meanings, interact with one another and take on new meanings. The culture collider in the title (in reference to the Large Hadron Collider, in which collisions of particles result in the creation of new particles) does not stand for confrontation but rather for the creation of new artistic qualities.
Bogna Dziechciaruk-Maj
Director, Manggha Museum 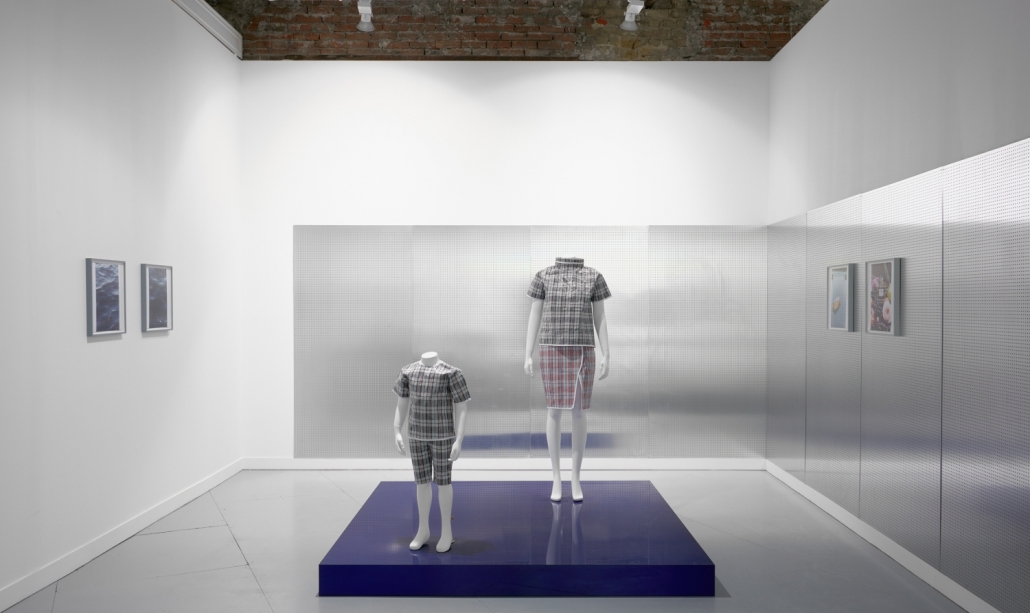 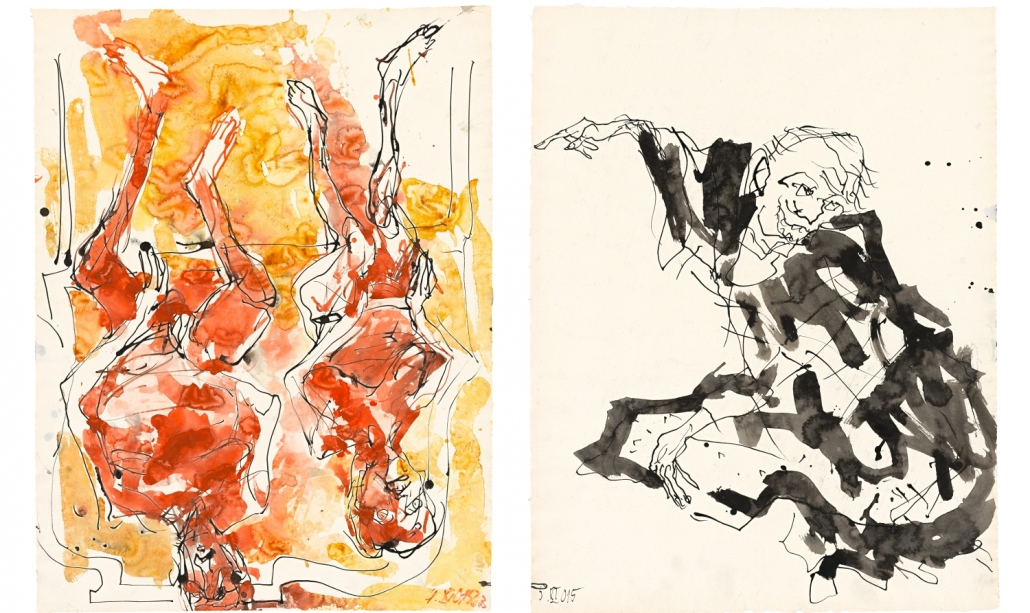 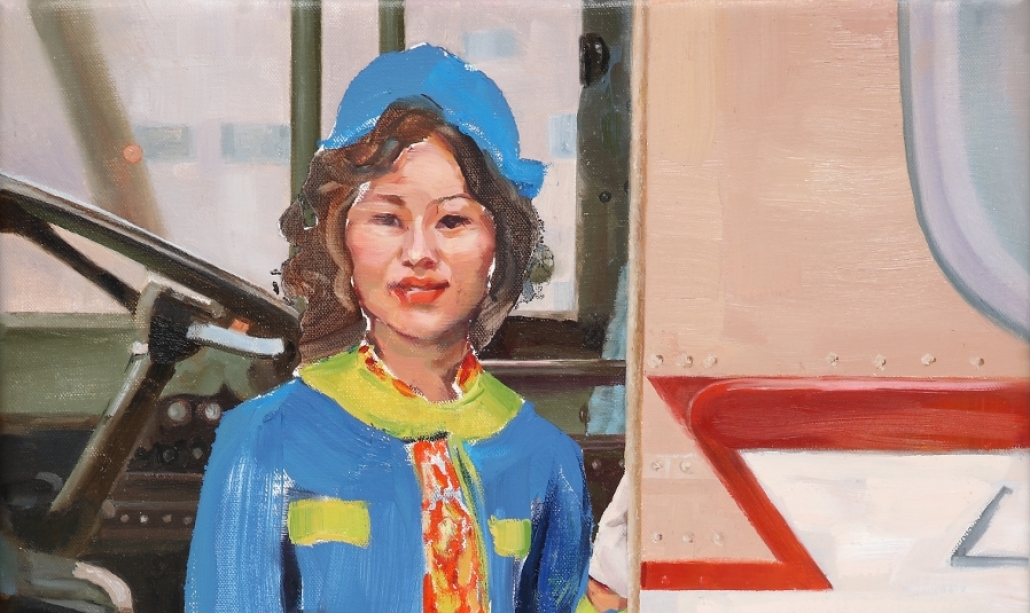 Paulina Ołowska, The Spring Uniform of Hato Bus Tour Attendant, 2018, photo by Światosław Lenartowicz, courtesy of the Artist and the Foksal Gallery Foundation
+
Danh Vō, 2.2.1861, ongoing project since 2009 (this letter is from 2016), photo: Melanie Wagner, Vienna
+

Today’s societies in Far Eastern countries (e.g. India, Pakistan, South Korea, North Korea, China, or Vietnam) are becoming more and more modern, increasing their economic influence and cultural self-assurance. In this New Global World, cultural differences gain significance comparable to the importance of ideological, political and economic ones. At this stage of postcolonialism and confronted with the ever changing economic interrelations and political contradictions, the artists from Asia and Europe who have been invited to take part in the Manggha Museum’s exhibition are trying to answer questions about the cultural condition in terms of history, values, mores, aesthetics, origin, language, the role of institutions, and the revival of religion.
Considered from this position, the subjectivity of an artistic entity manifests not as an indivisible centre or a solistic point of reference but merely as a discreet Deleuzean ‘fold’ on the surface of the shared cultural idioms in the contexts of cultural dissimilarity.
The attempts of artists creating post-exotic art towards fusion with the ‘Stranger’, who actually has long ceased to be the ‘Other’, and the agonistic (as the term is used by Chantal Mouffe), i.e. divergent interpretations of the jointly adopted rules, often radicalise well-established categories and concepts of cultural values, also provoking a new ideal of aesthetic sensitivity in their audiences.
In the planned exhibition, the ‘collision’ of Eastern and Western art takes place not as a linear accumulation but rather as congruences and suspenseful comparisons, oppositions and complementations between the various works of art as elementary particles in a selected setting. The media include painting, sculpture, objects, installation and video.

The title ‘The Culture Collider’ is a reference to the Large Hadron Collider at CERN near Geneva – a giant accelerator of elementary particles using special detectors to record the effects of their collisions. One of the crucial features of today’s globalized world is the unprecedented acceleration of information flow, and consequently – in a time of new divisions of the world and growing migration – an intensification of ‘collisions’ of mutually exotic cultural paradigms. The present exhibition aspires to be a ‘detector’ capturing the results of that process in the field of visual arts, and it posits the thesis that one of its effects is post-exotic art. The exhibition thus narrates the reciprocal infiltration and internalization of often mutually alien cultural values, exemplified by painting, objects, video, sculpture and sculptural installations.

Unlike the work of early 20th-century artists, the post-exotic attitude and art are not based on an external imagined stylization or stigmatization of the Other as revelations of the Exotic and the Alien, but rather its exponents knowingly inscribe the creative subject’s artistic statements into the spheres of meanings, parameters and contexts of other cultural subjects, and this act is so interferential that the ‘mechanical’ function of separating and isolating the particular elements of the Eastern and Western cultural complexes in a specific work of art is no longer possible. The intention underlying the exhibition is not to resolve beyond any ambiguity such dichotomies as ‘foreign vs. ours’, ‘distant vs. close’, or ‘subordinate vs. superior’, but rather, just like the neologism différance, this presentation seeks to capture them as a processual adaptation of a fluid perspective, revealing the mutual conditioning of the above binarisms.

The artists invited to take part in the exhibition thus take up anew old/new motifs and old/new techniques, approaching both contemporary phenomena and historical narratives with impetus and ingenuity. Some of them, for example those born in Asia, live and work in Europe today, because they either came here as refugees and stayed on or emigrated from Asia, choosing the West as their new home. Many of them, especially the younger ones, received artistic education from European academies and broke through the barrier of alienness dividing them from the (to them exotic) European culture. In the era of post-Westernization of non-Western societies, and in the context of conflicts generated by the competing Western and Eastern universalisms, they are trying to create – in their art, through their ‘multipolar’ and reciprocal narratives – a new, post-exotic paradigm.

The results of the diverse post-exotic artistic practices often include fantastic plays of the imagination, emancipated by a visual encounter with the Other (Ei Arakawa/Gambaroff, Hans Weigand, Jakub Julian Ziółkowski), sometimes also existential skirmishes or local exoticism (Paulina Ołowska, Shuvo Rafiqul). Some artists treat other cultures and conventions with respect, creating subjective hommages and diagonal parallels (Georg Baselitz, Yan Pei-Ming), while others – under the influence of the Alien – subject their native canons of art to transformations and interventions (Imran Qureshi, Kay Walkowiak, Lei Xue). Still other manifestations of post-exoticism are characterized by satanic humour, perverse polemics, or hidden, ironic play (Nina Beier, Andy Hope 1930, Dahn Vō, Guan Xiao), or reflections on authorship, copy vs. original, as well as the methods of generating and global distributions of images (Franz Schubert, Sung Tieu).

The starting point for the exhibition, nearly thirty years after the end of the Cold War, was once again the multicultural Viennese metropolis with its extensive art scene and market, in which most of the artists featured in this exhibition, from Europe and from Asia, of the younger and older generations alike, are artistically firmly anchored.
Goschka Gawlik
Curator

The show is accompanied by a bilingual catalog with texts by Goschka Gawlik, Piotr Popiołek, Jakub Piwowarski and Yiou Penelope Peng, Klaudia Adamowicz, Romana Schuler, Wojciech Szymański and reproductions of the exhibited works.

The exhibition within the Dni Austrii 2018